We have a sloping lot that slopes right to left. Although our house isn’t one of those sloping lot house plans, our lot gradually slopes, but just not enough to warrant a sloping home design. One thing we knew is that most likely to have landscaping that looks attractive and doesn’t wash away when it rains, we’re going to have to build a landscape bed, so our shrubs and flowers are contained within a walled area. Otherwise, our mulch will run off in heavier rainfalls.

Since moving into our new home, I have been paying close attention to the landscaping of many homes in our neighborhood. There are a few I really like, but I haven’t seen the exact thing I wanted yet. Being new homeowners, we visit home improvement retailers often getting things we need for the house. While at Lowe’s the other day, we picked up a concrete landscape brick I thought was a color that would look nice with our home. We just bought one so we could make sure the color was right before lugging a ton of heavy stone home with us only to find out it isn’t going to work. I’m glad we did too, because it wasn’t at all close to matching! It was way too gray. So, while at Menards, we bought another. This one definitely had more brown tones with some gray mixed in. Although it was a closer match, it still wasn’t close enough to satisfy me. I definitely wanted to build a wall that enhanced the beautiful stone we added to the front of our home, not detracted from it. And, I didn’t want the landscape to compete or clash. I guess you could say I was being really picky. But, after building our own home, I wanted it to have the best curb appeal possible. So, one last attempt from the big box retailer to find a stone had me buying one from Wal-Mart. And, just like the other, it just didn’t make the cut. Although those concrete landscape stones come in many colors, our stone on our house was much lighter in color, so none of these really seemed to fit. Next, we visited a local stone and landscape company. There were a few I saw right away that I thought could possibly work, but definitely one in particular. So, we bought just one. And, the search was over! 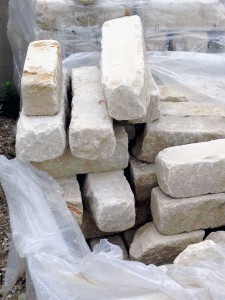 This stone exactly matched. In fact, it was the exact stone our builder used. I was elated! 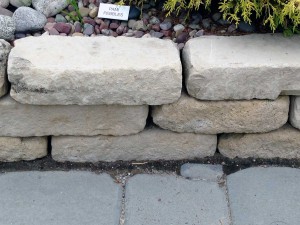 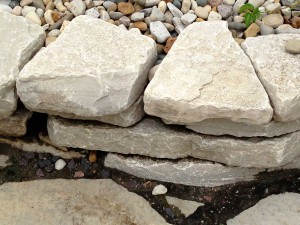 Initially, we thought our landscape wall would be two or three stones high at the wall’s lowest point. But, once we got the wall to that height, we realized we definitely needed to go at least 1 or two more stones in height to get to the ground level by our sidewalk. Before the wall is put up, we added a pipe to our getter and buried it under our grass. The plastic pipe went out a few feet from the house and then came to the surface of our lawn. On the end of the pipe we added a cap that rises up when water is coming through the gutter. Not only does this keep water from draining out of your gutters so close to your foundation, but it allows this gutter to drain outside of the wall we’re getting ready to build. 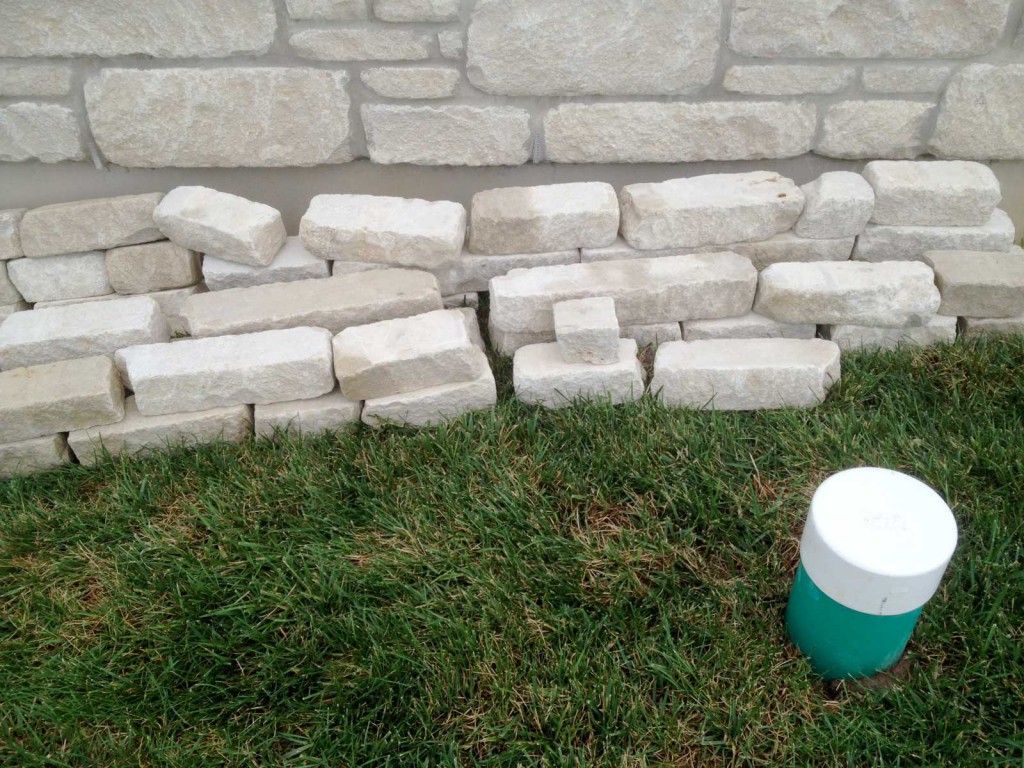 The first thing we had to do was determine the lowest point of our yard where we planned to build the wall. It was the back left corner of where the wall was going to be placed. We removed the sod and were careful to lay it on the empty lot next to our house in case we wanted to use it somewhere else. We actually placed it right up against the last piece of sod they used in our yard, so grass extended over a little further. Then, we dug out the earth a little and placed the first stone. Underneath the stone we added some Quikrete, so once we got everything exactly how we wanted it, we could wet the Quikrete and it would then harden to form a more solid base. Probably the most important thing you can do is make sure that very first stone is 100% level in all directions. Otherwise, it will create an unleveled starting point, which will result in a wall that’s leaning side-to-side or front to back. So, put the level on the stone so it is level left to right, and also level front to back too. Once you’ve managed to get that first stone level, then work off that stone. You will need to continue to dig out some of the mud and put Quikrete underneath the stone so it lies smoothly. Make sure each stone placed is completely level. We checked every stone we placed. This part was a little tedious, but it’s well worth taking your time on this part of the project. My husband and I worked together and I chose the stone lengths so we had variances and the ends of the stone from one level to the next weren’t laying on top of one another uniformly, or all stacked up. I wanted it to look like it was an extension of our home’s stone detail. We kept making our way up, but we did realize for stability we should’ve turned a few of the stones on each level into the space inside the wall so they would be stabilized behind the wall once the soil was added. That way when completed and the dirt was filled in there would be a little more stability. But, since we didn’t arrange any of the stone that way, we decided to use concrete on the inside of the wall for support. Once we got to the level of the higher ground, we just did one row of stone. We also wanted to make sure the wall came out far enough in the front to put the plumbing pipe that was capped off inside the flowerbed we were creating. Our goal was also to conceal that eyesore placed right in the front of our house and we succeeded. 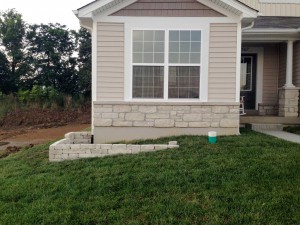 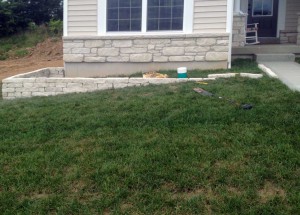 Once the wall was in place and we liked how it looked, we wet the area so the Quikrete could set up. Then, my husband mixed up extra Quikrete and applied it to the back or interior side of the wall for more stability. Luckily, the space still drained well after this extra concrete, or our plantings could’ve been flooded every time we watered because water would’ve been trapped in the flowerbed. 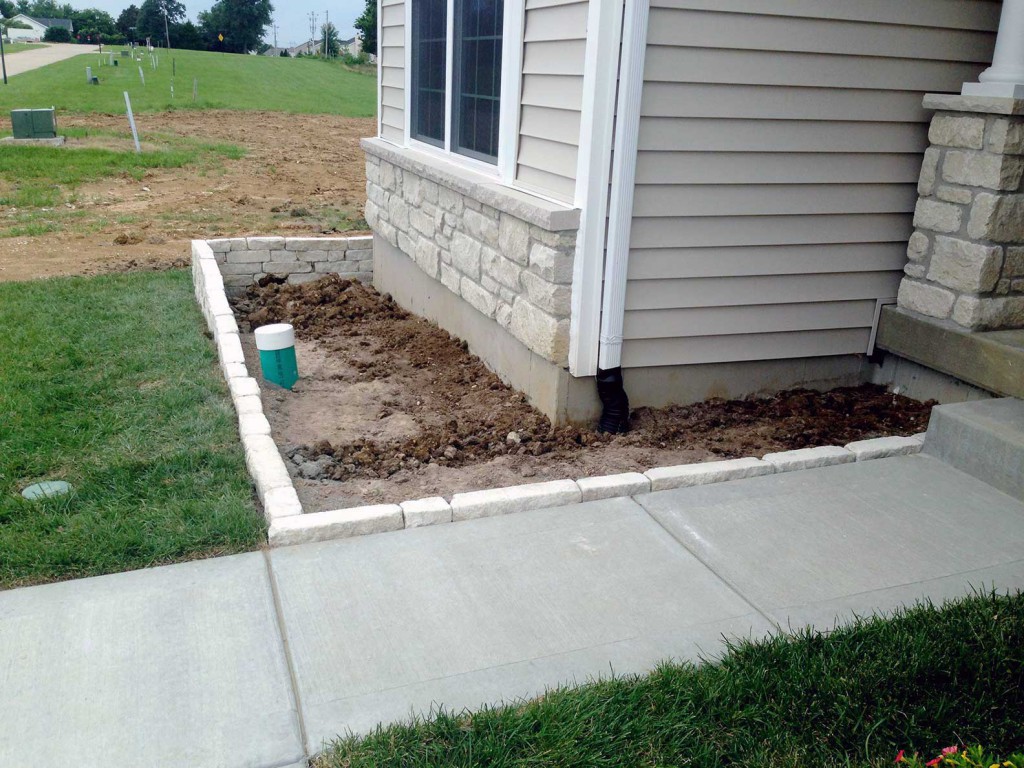 Then, we began filling the space with dirt and also bought some soil from the store as well. We planted a couple of small shrubs, a few flowers and an ornamental tree and added mulch to complete. 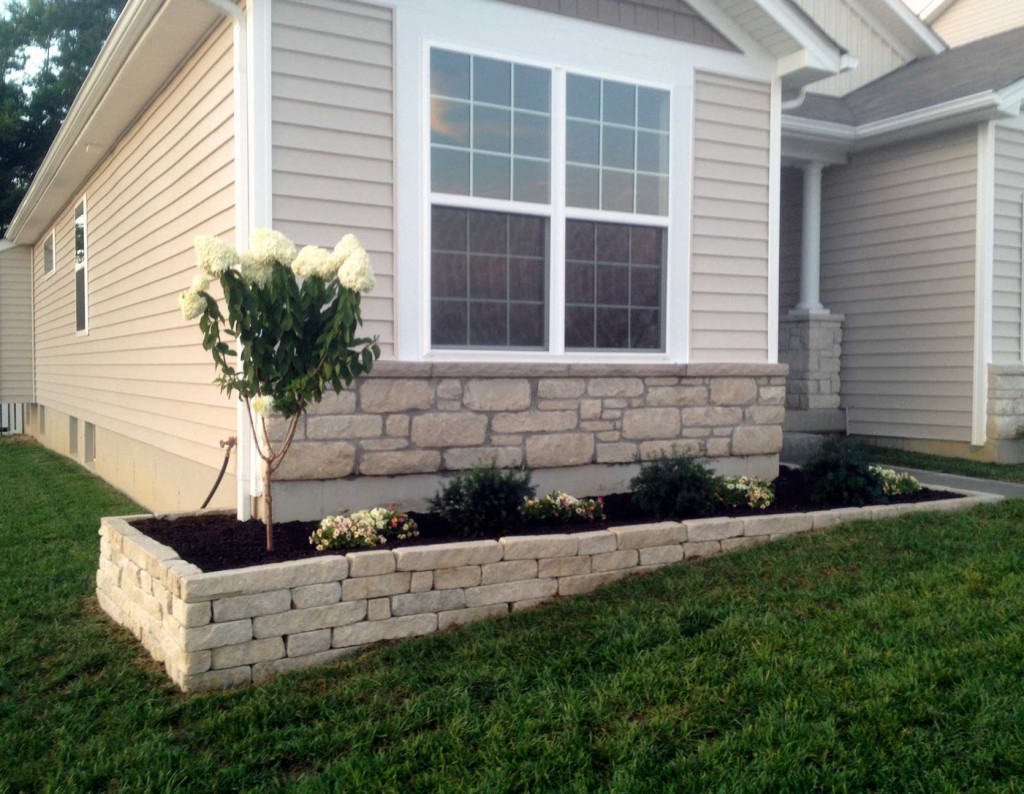 One tip that works great when planting flowers, especially when it’s a little later in the season is to buy hanging baskets or already planted flowerpots. Dig your hole for your flowers and plant the entire hanging basket or flowerpot into the hole all in one place. The huge clump of flowers makes much more of an impact than planting individual flower stems interspersed here and there. Those individual plants will take forever for your garden to fill in! So, now this where we planned for the project to be completed. But, I felt the other side of the sidewalk looked incomplete, so a few weeks later we finished it off in the same manner and it looks so much better. I was afraid if we didn’t complete that side now, then when we went back for more stone, it could be gone. 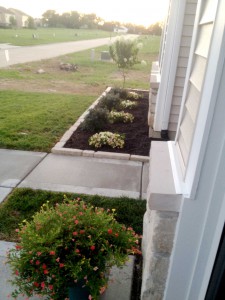 We are thrilled with the outcome of our wall and so glad I was so stubborn about finding the perfect stone. If you have stone on your house that you want to try to incorporate in your outdoor landscaping, I recommend asking your builder what type, color, and company the stone he used came from especially if you build one of those house plans with an outdoor fireplace, or home plans with outdoor kitchens where stone could be used on a hearth. It would look amazing to match an outdoor kitchen or outdoor fireplace’s stonework to your home’s stonework to create a seamless look! What type of landscaping projects have you done using stone?

5 thoughts on “How To Build A Landscape Wall”